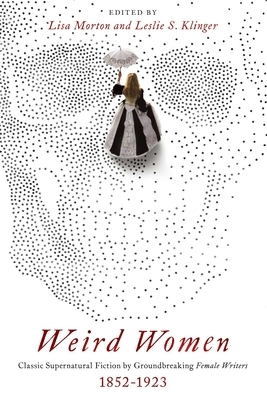 By, for, or about, these are really weird women’s stories, and we love it.

From two acclaimed experts in the genre, a brand-new volume of supernatural stories showcasing the forgotten female horror writers from 1852-1923.While the nineteen-year-old Mary Shelley may be hailed as the first modern writer of horror, the success of her immortal Frankenstein undoubtedly inspired dozens of female authors who wrote their own evocative, chilling tales. Weird Women, edited by award-winning anthologists Lisa Morton and Leslie S. Klinger, collects some of the finest tales of terror by authors as legendary as Louisa May Alcott, Frances Hodgson Burnett, and Charlotte Gilman-Perkins, alongside works of writers who were the bestsellers and critical favorites of their time–Marie Corelli, Ellen Glasgow, Charlotte Riddell–and lesser known authors who are deserving of contemporary recognition.As railroads, industry, cities, and technology flourished in the mid-nineteenth century, so did stories exploring the horrors they unleashed. This anthology includes ghost stories and tales of haunted houses, as well as mad scientists, werewolves, ancient curses, mummies, psychological terrors, demonic dimensions, and even weird westerns. Curated by Klinger and Morton with an aim to presenting work that has languished in the shadows, all of these exceptional supernatural stories are sure to surprise, delight, and frighten today’s readers.

Queens of the Abyss: Lost Stories from the Women of the Weird

It is too often accepted that during the 19th and early 20th centuries it was the male writers who developed and pushed the boundaries of the weird tale, with women writers following in their wake–but this is far from the truth. This new anthology follows the instrumental contributions made by women writers to the weird tale, and revives the lost authors of the early pulp magazines along with the often overlooked work of more familiar authors. See the darker side of The Secret Garden author Frances Hodgson Burnett and the sensitively-drawn nightmares of Marie Corelli and Violet Quirk. Hear the captivating voices of Weird Tales magazine contributors Sophie Wenzel Ellis, Greye La Spina, and Margaret St Clair, and bow down to the sensational, surreal, and challenging writers who broke down the barriers of the day. Featuring material never before republished, from the abyssal depths of the British Library vaults.

For fans of the best-selling Women’s Weird anthology comes the next installment of stories by female writers of the late nineteenth and early twentieth century that embrace the supernatural, horror, and the Gothic.Edited by literary historian Melissa Edmundson, Women’s Weird 2 features thirteen classic Weird short stories that showcase how these authors moved beyond the traditional ghost story and into areas of Weird fiction and dark fantasy. A detective, a young woman caught in a rainstorm, an author acquiring witchcraft skills–these are examples of how women continued to push and defy the genre expectations of the era.