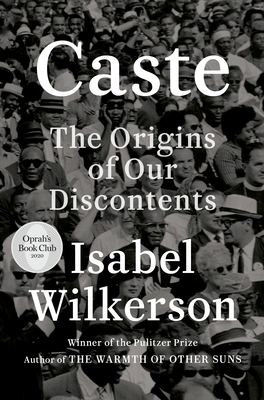 Nonfiction Books You Need on Your Shelf This Year

Let’s admit that 2020 has changed the way we all function, and changed the most important things in our lives. This year’s books have been eye opening to say the least. Let’s take a look at some of them.

Caste: The Origins of Our Discontents

The Pulitzer Prize-winning, bestselling author of The Warmth of Other Suns examines the unspoken caste system that has shaped America and shows how our lives today are still defined by a hierarchy of human divisions. NAMED ONE OF THE TEN BEST BOOKS OF THE YEAR BY THE WASHINGTON POST AND PUBLISHERS WEEKLY AND ONE OF THE BEST BOOKS OF THE YEAR BY The New York Times Book Review – O: The Oprah Magazine – Time – NPR – The New York Public Library – Fortune – Smithsonian Magazine – Marie Claire – Town & Country – Library Journal – Kirkus Reviews “As we go about our daily lives, caste is the wordless usher in a darkened theater, flashlight cast down in the aisles, guiding us to our assigned seats for a performance. The hierarchy of caste is not about feelings or morality. It is about power–which groups have it and which do not .”In this brilliant book, Isabel Wilkerson gives us a masterful portrait of an unseen phenomenon in America as she explores, through an immersive, deeply researched narrative and stories about real people, how America today and throughout its history has been shaped by a hidden caste system, a rigid hierarchy of human rankings. Beyond race, class, or other factors, there is a powerful caste system that influences people’s lives and behavior and the nation’s fate. Linking the caste systems of America, India, and Nazi Germany, Wilkerson explores eight pillars that underlie caste systems across civilizations, including divine will, bloodlines, stigma, and more. Using riveting stories about people–including Martin Luther King, Jr., baseball’s Satchel Paige, a single father and his toddler son, Wilkerson herself, and many others–she shows the ways that the insidious undertow of caste is experienced every day. She documents how the Nazis studied the racial systems in America to plan their out-cast of the Jews; she discusses why the cruel logic of caste requires that there be a bottom rung for those in the middle to measure themselves against; she writes about the surprising health costs of caste, in depression and life expectancy, and the effects of this hierarchy on our culture and politics. Finally, she points forward to ways America can move beyond the artificial and destructive separations of human divisions, toward hope in our common humanity. Beautifully written, original, and revealing, Caste: The Origins of Our Discontents is an eye-opening story of people and history, and a reexamination of what lies under the surface of ordinary lives and of American life today.

The Dragons, the Giant, the Women: A Memoir

When Wayétu Moore turns five years old, her father and grandmother throw her a big birthday party at their home in Monrovia, Liberia, but all she can think about is how much she misses her mother, who is working and studying in faraway New York. Before she gets the reunion her father promised her, war breaks out in Liberia. The family is forced to flee their home on foot, walking and hiding for three weeks until they arrive in the village of Lai. Finally, a rebel soldier smuggles them across the border to Sierra Leone, reuniting the family and setting them off on yet another journey, this time to the United States. Spanning this harrowing journey in Moore’s early childhood, her years adjusting to life in Texas as a black woman and an immigrant, and her eventual return to Liberia, The Dragons, the Giant, the Women is a deeply moving story of the search for home in the midst of upheaval. Moore has a novelist’s eye for suspense and emotional depth, and this unforgettable memoir is full of imaginative, lyrical flights and lush prose. In capturing both the hazy magic and the stark realities of what is becoming an increasingly pervasive experience, Moore shines a light on the great political and personal forces that continue to affect many migrants around the world, and calls us all to acknowledge the tenacious power of love and family.

One of Publishers Weekly’s Top 10 Fiction Books from 2020 In The Last Great Road Bum, Héctor Tobar turns the peripatetic true story of a naive son of Urbana, Illinois, who died fighting with guerrillas in El Salvador into the great American novel for our times. Joe Sanderson died in pursuit of a life worth writing about. He was, in his words, a “road bum,” an adventurer and a storyteller, belonging to no place, people, or set of ideas. He was born into a childhood of middle-class contentment in Urbana, Illinois and died fighting with guerillas in Central America. With these facts, acclaimed novelist and journalist Héctor Tobar set out to write what would become The Last Great Road Bum .A decade ago, Tobar came into possession of the personal writings of the late Joe Sanderson, which chart Sanderson’s freewheeling course across the known world, from Illinois to Jamaica, to Vietnam, to Nigeria, to El Salvador–a life determinedly an adventure, ending in unlikely, anonymous heroism. The Last Great Road Bum is the great American novel Joe Sanderson never could have written, but did truly live–a fascinating, timely hybrid of fiction and nonfiction that only a master of both like Héctor Tobar could pull off.

The Price of Peace: Money, Democracy, and the Life of John Maynard Keynes

NEW YORK TIMES BESTSELLER – An “outstanding new intellectual biography of John Maynard Keynes [that moves] swiftly along currents of lucidity and wit” (The New York Times), illuminating the world of the influential economist and his transformative ideas”A timely, lucid and compelling portrait of a man whose enduring relevance is always heightened when crisis strikes.”–The Wall Street Journal

At the dawn of World War I, a young academic named John Maynard Keynes hastily folded his long legs into the sidecar of his brother-in-law’s motorcycle for an odd, frantic journey that would change the course of history. Swept away from his placid home at Cambridge University by the currents of the conflict, Keynes found himself thrust into the halls of European treasuries to arrange emergency loans and packed off to America to negotiate the terms of economic combat. The terror and anxiety unleashed by the war would transform him from a comfortable obscurity into the most influential and controversial intellectual of his day–a man whose ideas still retain the power to shock in our own time. Keynes was not only an economist but the preeminent anti-authoritarian thinker of the twentieth century, one who devoted his life to the belief that art and ideas could conquer war and deprivation. As a moral philosopher, political theorist, and statesman, Keynes led an extraordinary life that took him from intimate turn-of-the-century parties in London’s riotous Bloomsbury art scene to the fevered negotiations in Paris that shaped the Treaty of Versailles, from stock market crashes on two continents to diplomatic breakthroughs in the mountains of New Hampshire to wartime ballet openings at London’s extravagant Covent Garden. Along the way, Keynes reinvented Enlightenment liberalism to meet the harrowing crises of the twentieth century. In the United States, his ideas became the foundation of a burgeoning economics profession, but they also became a flash point in the broader political struggle of the Cold War, as Keynesian acolytes faced off against conservatives in an intellectual battle for the future of the country–and the world. Though many Keynesian ideas survived the struggle, much of the project to which he devoted his life was lost. In this riveting biography, veteran journalist Zachary D. Carter unearths the lost legacy of one of history’s most fascinating minds. The Price of Peace revives a forgotten set of ideas about democracy, money, and the good life with transformative implications for today’s debates over inequality and the power politics that shape the global order.

Unworthy Republic: The Dispossession of Native Americans and the Road to Indian Territory

A masterful and unsettling history of “Indian Removal,” the forced migration of Native Americans across the Mississippi River in the 1830s and the state-sponsored theft of their lands.

There has been insufficient ‘reckoning with the conquest of the continent, ‘ Claudio Saunt relays in this excellent new book. In many accounts of U.S. history, the discussion of the mass deportation of native nations during the 1830s remains far too brief. Deportation’s legacies in law, culture, and community continue to this day and find powerful exploration in this important addition to the field.–Ned Blackhawk (Western Shoshone), professor of history and American studies, Yale University

The Address Book: What Street Addresses Reveal about Identity, Race, Wealth, and Power

Finalist for the 2020 Kirkus Prize for Nonfiction One of Time Magazines’s 100 Must-Read Books of 2020 Longlisted for the 2020 Porchlight Business Book Awards An entertaining quest to trace the origins and implications of the names of the roads on which we reside. –Sarah Vowell, The New York Times Book Review When most people think about street addresses, if they think of them at all, it is in their capacity to ensure that the postman can deliver mail or a traveler won’t get lost. But street addresses were not invented to help you find your way; they were created to find you. In many parts of the world, your address can reveal your race and class.In this wide-ranging and remarkable book, Deirdre Mask looks at the fate of streets named after Martin Luther King Jr., the wayfinding means of ancient Romans, and how Nazis haunt the streets of modern Germany. The flipside of having an address is not having one, and we also see what that means for millions of people today, including those who live in the slums of Kolkata and on the streets of London. Filled with fascinating people and histories, The Address Book illuminates the complex and sometimes hidden stories behind street names and their power to name, to hide, to decide who counts, who doesn’t–and why.